The latest from our blog
Choose your area of interest: 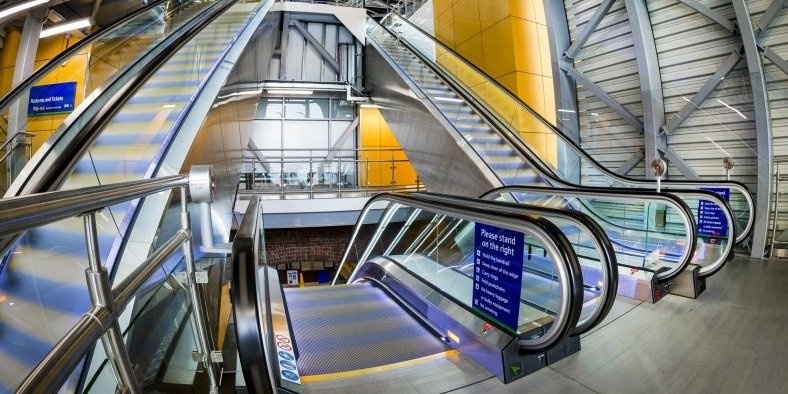 The History of Escalators | Stannah

From idea to patent to prototype to full working system, escalators illustrate a common human quest: to make life easier. Read more about the history of the now common escalator...

With their roots in ancient Egypt, escalators as we know them originated in 19th-century America, closely followed by France and Germany, taking just 40 years to become commercially viable.

Now in use worldwide, escalators are essential people-movers, together with moving walkways, in heavy footfall venues such as airports, shopping malls, hotels, rail stations, stadiums and arenas.

Known for their ingenuity and vision, ancient Egyptians used a primitive escalator, comprising stone blocks rolled on tree trunks up earthworks, to construct the 139-metre Great Pyramid of Giza, c. 2580–2560 BC.

In 1859, patent solicitor and writer, Nathan Ames of Massachusetts, held the first escalator patent in the United States for his ‘Revolving Stairs’ – but the idea did not move beyond this stage.

“…The nature of my invention consists in arranging steps, or stairs, upon an inclined endless belt, chains, or ropes, or in attaching the stairs or steps together by links or joints so as to form an endless inclined flight of steps or stairs, which are placed on, over, or around, rollers, so that the stairs or steps shall serve as elevators, when motion is transmitted to the rollers…”

Around the same time, in 1867, Stannah was founded in London, making hoists and cranes for city dockyards.

Leamon Souder’s the Stairway was patented in 1889 Philadelphia but remained unbuilt. It was the first of four escalator-style patents issued to him, including two for spiral designs.

It wasn’t until 1892 that the first working escalator materialised, or ‘Endless Conveyor or Elevator’ as it was named by inventor, Jesse Wilford Reno. With a 25o incline this slow-moving, single-platform conveyor belt showcased in 1896 at the Old Iron Pier, Coney Island in New York City.

In the same year, George A. Wheeler’s patent for a flat-step moving staircase was bought by inventor, Charles Seeberger, and transformed into a prototype built by Otis Elevator Company in 1899 – the world’s first commercial escalator. Comprising smooth treads from which the passenger had to dismount sideways, it won first prize at the 1900 Paris Exposition Universelle.

Charles Seeberger coined the term ‘escalator’ in 1900. A portmanteau of Latin ‘scala’ (stairway), e and tor = means of traversing from.

Hello, Europe! Escalators Spring Up Across the Pond

Also exhibiting at the Paris Exposition Universelle were two different contraptions by French manufacturers, Piat and Hallé. Hallé continued to sell its device in Europe but was swiftly overtaken by bigger manufacturers.

Piat installed England’s first escalator in Harrods, London, in 1898. 40’ high and powered by a continuous leather belt comprising 224 linked ‘steps’, it caused quite a stir among its first users…

"Customers unnerved by the experience were revived by shopmen dispensing free smelling salts and cognac.”  - The Department Store: A Social History, William Lancaster.

“There can be no doubt as to the usefulness of the invention, and they should soon be in general use in railway stations, public buildings, hotels, warehouses, &c.” - Press Opinion: Warehouseman and Draper.

In 1906, the world’s first spiral escalator (thanks to pioneering inventor Jesse Reno’s dogged perseverance) was installed in Holloway Road station, London.  It ran at 30m a minute, rising just over 10m in height. Never used and abandoned as unsafe, this radical invention was lost to the world and did not resurface until inadvertently unearthed in 1988, at the bottom of an old lift shaft.

The first working escalator on the Underground was installed at Earl's Court in 1911, in fact they installed two! They were an instant success and from 1912, all new deep-level stations were provided with escalators instead of lifts. According to Transport for London, today there are 440 passenger escalators and 184 passenger lifts across the Tube network. But they're not your typical escalator as they travel up to 0.75 metres per second, faster than the 0.5 metres per second in escalators used in shops and department stores, also with a longer landing length.

Escalators rapidly gained a firm grip throughout the world – not just in number but in type, from helical (spiral) and wheelchair accessible to the Levytator, an escalator capable of following free-form curves, and named after its inventor, Jack Levy, Emeritus Professor of Mechanical Engineering at City University London.

In 2010, Stannah welcomed escalators to its flourishing lift product portfolio.

Today, escalators are used all over the world. Their advantages over passenger lifts are many, mainly in the ability to transfer far greater numbers of pedestrian traffic over the same time (although they can't accommodate wheelchair users).

They can be easily installed in places that are designed for ordinary staircases and they can even be used in outdoors (with adequate waterproofing protection). Escalators are often installed in department stores, supermarkets, airports and train stations.

Like their lift buddies, we here at Stannah love all the escalators we install and service, so want to leave you with our top three fun facts:

We hope you liked the rise and history of the escalator, if you're keen to know more why not take a look at our escalator product page? And see the complete range of products and services the Stannah lift company provide.

With nearly 50,000 installations across the UK and over 90,000 units on our service portfolio, Stannah offer a wide range of lift solutions and services to move people and goods. Take a look at our product range or simply get in touch.